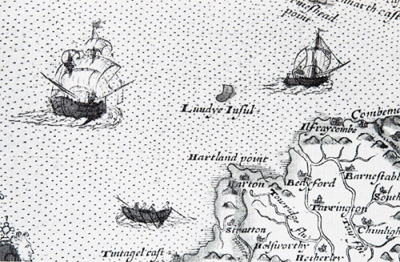 Early times to the16th Century
The Torridge estuary and the seas around our islands have been important routes for travellers and trade since unrecorded pre history. Traders from the Mediterranean were seeking tin, copper and lead from the South West peninsular during the 3rd Century BC and this trade continued throughout the Roman occupation and during the Dark Ages.

Viking raiders made good use of the Bristol Channel for their attacks on our coastal settlements during the 9th Century AD but were defeated by the Saxon tribes of Devon at battles in 878 and 981. The first document to show that fish were being taken from the estuary dates from 857AD and this probably refers to fish traps which were numerous and continued in use until the early 20th Century. For a more in depth artice on Shipping and Ship Building in Bideford up to 1500, click here. 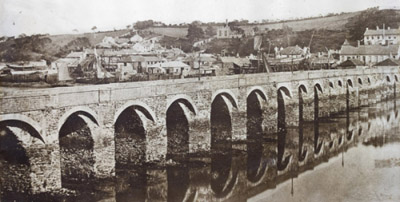 1500 to 1740
The revolutionary changes in ship design during the first part of the 16th century enabled our mariners to undertake longer voyages of exploration.  The ships became more manageable and seaworthy and could be manned by smaller crews and consequently less food and drink was needed to be carried in order to sustain them on the long ocean crossings. They landed on an island south of Cape Hatteras, now known as Ocracoke, and spent some time exploring it and the other coastal islands and adjacent mainland. It was not until sometime later that Grenville moved to establish the colony on the North end of Roanoke Island. Ralph Lane was made Governor and quickly built a fort whose present day location is now believed to be submerged a few yards off-shore.

The discovery of vast shoals of cod off the shores of Newfoundland in 1495 attracted our fishermen away from the Irish Sea and to the foggy shores of Labrador and Newfoundland. When the first British colony in North America was set up by Humphrey Gilbert on Newfoundland in 1583, most of the settlers were fishermen’s families from Devon who had been sailing to the fishing grounds for over forty years.

Drake, Raleigh. Hawkins and Grenville, all later national heroes, developed their skills in naval warfare in these ‘adventuring’ expeditions. Grenville and Raleigh also attempted to set up a colony in North America on the island of Roanoke on the coast of what is now North Carolina. For a more in depth article on Shipping ans Ship Building in Bideford between 1500 and 1740, click here. 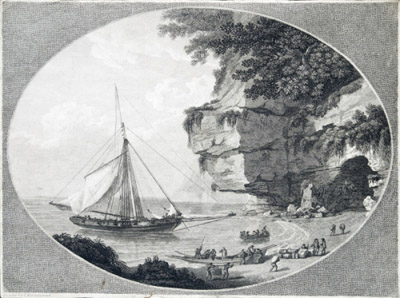 1740 to 1900
The prosperity, which Bideford had enjoyed for the first three decades of the 18 th century, came to an end as Britain became involved in a series of conflicts starting in 1744 with the French and Spanish wars.  The American War of Independence followed by the Napoleonic Wars took a heavy toll on both our trading interests and on our seamen and fishermen who were under constant threat from the naval press gangs.  Some however were keen to sign on aboard the potentiality lucrative privateering ships such as ‘ Tygress’ of Bideford, which captured seven prizes and their cargos between 1739 and 1756.

The smuggling of imported goods was rife during the whole of the 18 th century and our coastal traders were able to make good profits by hiding small packages and casks collected from French ships ‘hovering’ well off shore, then delivering them to beaches and inland estuary farms for later distribution.  It is not surprising to find that none of the 18 th century Letter Books for the Bideford Board of Customs have survived, given the nature of some of our most prominent citizens who owned or had shares in the fifty two coasters registered in the port in 1787. For a more in depth artice on Shipping and Ship Building in Bideford between 1740 and 1900, click here.

1900 to Present Day
The start of the 20 th century saw major change in shipbuilding on the Torridge when Robert Cock and Sons commenced building riveted wrought-iron vessels in what was then known as the Iron Yard at Appledore in 1902.

The last wooden merchant ship to be launched in the port was the schooner ‘PT Harris’ built at the Hubbastone yard of PK Harris & Sons in 1912.  Harris’s took over the New Quay yards and dry docks in 1908 where they specialised mainly in ship repair work.

At the end of hostilities in 1919, there was an urgent need for new ships to replace those sunk by enemy action.

It was fortunate that the shipwrights skilled in wooden ship construction were able to continue their trade between the two World Wars as they were suddenly in great demand for building the wooden mine sweepers which were much less vulnerable to the new magnetic mines laid down during the Second World War.

The two main Appledore dockyards and dry docks were exclusively employed on Admiralty work, building, repairing and modifying the many strange craft and items of equipment. For a more indepth article about Shipping and Ship Building in Bideford from 1900 to the present day, click here.