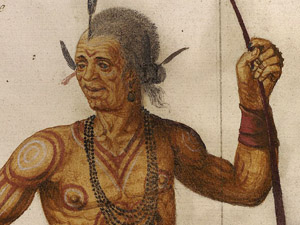 The Saga of Roanoke and the ‘Lost’ Colony 1584 ~ The First Voyage ~ Discovery of Roanoke
On April 27, 1584, Captains Philip Amadas and Arthur Barlowe left Plymouth to explore the North American coast for Sir Walter Raleigh. The party of explorers landed on July 13, 1584, on the North Carolina coast, just south of Roanoke Island, and took possession of the country for Queen Elizabeth. On the fourth day they were visited by Granganimeo, brother of Wingina, chief of the Roanoke Island Indians. After a short period of trading, Barlowe and seven others went by boat to Roanoke Island at the north end of which they found an Indian village, where the town of Manteo now stands. Two Indians, Wanchese and Manteo, were persuaded to return to England to meet Raleigh and Queen Elizabeth I.

1585-86 ~ The Second Voyage and Raleigh ‘s First Colony
The next spring, Raleigh sent another colony to Roanoke Island. The expedition, commanded by Raleigh’s cousin, Sir Richard Grenville from Bideford, sailed on April 9, 1585. Included in the group of ship captains and colonists were Philip Amadas and Simon Ferdinando of the expedition of the previous year; Thomas Cavendish, destined to be the third circumnavigator of the globe; a scientist named Thomas Hariot; Grenville’s half-brother, John Arundell, brother-in-law, John Stukeley; Commander Ralph Lane (who later declared Grenville as being “insufferable”), and an artist, John White who was set to become a pivotal player in the Roanoke Sagas. The two native Indians, Wanchese and Manteo, who had travelled to England the previous year also returned to America on this voyage.

They landed on an island south of Cape Hatteras, now known as Ocracoke, and spent some time exploring it and the other coastal islands and adjacent mainland. It was not until sometime later that Grenville moved to establish the colony on the North end of Roanoke Island. Ralph Lane was made Governor and quickly built a fort whose present day location is now believed to be submerged a few yards off-shore.

Drake’s Relief
For the colonists, relations with the Indians continued friendly enough for a while but eventually deteriorated to the point where the Colonist’s lack of adaptation to the environment left them in a perilous state. By May 1586, the colonists having outworn their welcome with the Indians, were at open war with them.

The Colonists planned relief from Grenville was delayed in Bideford and had it not been for the timely arrival of Sir Francis Drake passing by with a fleet of 23 ships, mostly ‘borrowed’ from the Spanish and richly laden with booty, the Colonists might have perished. As it was Drake gave them all immediate return passage to England with his fleet. When Drake sailed, on June 18 1586 he carried the remnants of the first colony home with him.

Passing Ships and the Mystery of the Fifteen
A supply ship sent out by Sir Walter Raleigh arrived barely a few days after the departure of Drake, but after searching in vain for the colonists, returned to England . Amazingly Grenville arrived only days later, barely two weeks after Drake had sailed, and likewise searched in vain for the colonists. Grenville found the places of colonial settlement desolate, but being unwilling to leave Roanoke unclaimed, he left 15 men on the Island , fully provisioned for 2 years, with orders to hold the country for the Queen while he returned to Bideford. (Most of these men it is though were actually from the Bideford area but their names were not recorded. When Governor John White arrived back in 1587 only the bones of one of them was found. The other 14 had disappeared without trace.)

It was however, whilst searching the area that Grenville skirmished with some of the now hostile Indians on Roanoke . The story goes that one of them was taken onboard ship and that it is this Native Indian who lies buried in Bideford’s Parish Church as the first Native American laid to rest on English soil. (“Rawley a Winganditioan”)

The Second (‘Lost’) Colony of 1587
In the year 1587, Sir Walter Raleigh organized another colonial expedition consisting of 117 persons. This time rather than being a military Colony, this one consisted of settlers and came with its own government comprising of a governor (John White) and 12 assistants whom Raleigh incorporated as the “Governor and Assistants of the Citie of Ralegh in Virginia.” (The title ‘City of Raleigh ‘ has now been bestowed upon the Town of Manteo by our Royal College of Arms.)

From the list of names that has come down to us, several of the colonists took their wives with them and at least two their children too. What is also now thought is that some of these colonists had once formed part of Grenville and Raleigh ‘s Irish Plantation workforce.

The fleet probably sailed from Bideford for Roanoke on May 8.
The ships reached Roanoke on July 22, 1587. John White and his party set out to find the fort of 1585 razed to the ground but a number of the houses still standing. These houses were repaired and new ones added. However, the Indians proved to be more hostile than they had been in 1585 and George Howe, one of the assistants, was killed by the Indians soon after the landing. Nevertheless, through the Indian Manteo’s negotiating skill, friendly relations with the Croatoan Indians were re-established, although many other tribes remained wary of the Englishmen.

On August 18th, John White’s daughter, Eleanor, wife of Ananias Dare, gave birth to a daughter, who was named Virginia and was the first child of English parentage to be born in the New World . Shortly afterwards another child was born to Dyonis and Margery Harvie, a boy, but sadly his name is unrecorded.

Despite the apparent Joy, it was clear that the colony needed more help and supplies and on the 27th August 1587, John White, rather oddly agreed to abandon his daughter and grandchild and sailed homeward with Grenville’s fleet to obtain them.

The Spanish Intervention
The following year 1588 was the Armada year. Sir Richard Grenville, who was preparing a new fleet at Bideford to go to Roanoke , was ordered to divert his five ready ships to the English Navy for service against the Armada. This is almost certainly how such a small town as Bideford was able to supply the third largest English fleet to fight the Armada; perhaps though the most intriguing part of this event is that it is recorded that the Native Indian buried in Bideford’s Parish Church, was onboard one of those ships bound for Roanoke. Whether he became one of those involved in the Armada war is uncertain but it is tantalizing to think that he may have also been the first Native American to fight alongside the British in defence of England .

A Failed Rescue Bid
Grenville did however finally gain permission to use two small ships to send to Roanoke with emergency provisions. John White sailed from Bideford with these on April 28, but the barques ‘Brave’ and ‘Roe’ were small, poorly equipped and provisioned and as ridiculous as it seems they chose to fight every Spanish ship they could en-route much to their own downfall and they finally turned back at Madeira beaten and exhausted.

The Mystery of the Lost Colony
It was not until March 20th 1590 that John White sailed for the last time for Roanoke. When they arrived, they found the settlement deserted. One of the remaining posts of the Palisade had carved on it the word ‘CROATOAN’, which suggested the settlers had fled to the nearby home of Manteo’s friendly Indians.

Next day John White and the crew had planned to go to Croatoan Island to look for the colonists but the weather was completely against them. They headed for the West Indies to take on fresh water and food and hoped then to be able to return to Croatoan. However, a storm blew them off course and toward the Azores from where they eventually gave up and made their way back to England . John White never ventured to the New World again and reportedly spent his last days on Grenville and Raleigh’s plantations in Ireland dying perhaps as little as three years later in 1593.

Epilogue
As late as 1602, Raleigh was still seeking in vain for his lost colony. In that year he sent out an expedition which reached land southwest of Hatoras, presumably at or near Croatoan Island , but there is no record of any successful contact.

Long after the establishment of the Jamestown settlement in Virginia in 1607 too, the Virginia colonists showed a constant interest in trying to learn from the Indians the whereabouts of the Roanoke settlers and despite several well documented stories of blue-eyed Indians, English styled fields, and a sighting of several white men and a young girl beating copper for the Indians, nothing was ever fully investigated and the story of the Lost Colonists was destined to become America’s greatest Mystery.

The Awakening
Advances in the study of DNA now mean that we have the ability to prove once and for all if any of those ‘Lost Colonists’ survived long enough to produce offspring, and to this end we are working with a group in the USA who have been compiling DNA evidence for some considerable time. What we now need is to establish if there are any living family descendants of those lost colonists living here in the UK and from them produce a reference library of DNA to match the American results against.

The significance of this project is simple. If we are right and there are descendants of those lost colonists alive in America today, then Thanksgiving Day is being celebrated on the wrong day and the ‘Little White Town’ of Bideford will become known for having played a pivotal role in the founding of America thirty-three years before the Mayflower set sail.