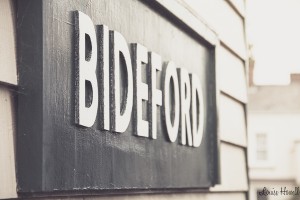 The port and town of Bideford occupies a unique place in British railway history as the home of the Bideford, Westward Ho! & Appledore Railway. This short line was the only standard gauge railway in Britain not to be connected to the rest of the system and was the only railway company with an exclamation mark in its title. Opened in 1901, this remarkable railway ran down the centre of Bideford Quay, starting from a point between High Street and Cooper Street. The line then ran round the corner and up what is now Kingsley Road to the engine and carriage sheds. After passing the two sheds, the line turned sharply west and headed up past Kenwith Castle, between Abbotsham Court and Cornborough, to Cornborough Cliffs. From here the line turned right and followed the edge of the cliffs down and into Westward Ho! The railway ran through what was then a small select development of houses and hotels and terminated just the other side of Westward Ho! near the gas works. In 1908 an extension was opened which carried the line on past the Golf Club and Watertown to Appledore.

Captain George Mill Frederick Molesworth, J.P., R.N. (retired), a notable personality and landowner in the area was among a group of businessmen keen to develop the barren land near Northam Burrows into a fashionable resort. In 1863 the Northam Burrows (North Devon) Hotel & Villa Building Company was floated for the erection of grand hotels and villas in the area, underlining their desire to develop the land. The area was highly recommended by the medical profession for its bracing and restorative fresh air and this aspect was seized on by the promoters. A railway link was felt to be vital to encourage prospective residents, holidaymakers and visitors. The embryo town was named “Westward Ho!” following the success of Charles Kingsley’s novel of that name which had been published in 1855.

After some considerable effort in raising local support, Molesworth and his colleagues were successful in getting an Act of Parliament passed in 1866 for a line from Bideford through Appledore to Westward Ho! Although some work was started, the contractor went bankrupt almost immediately and the project was abandoned. A pier, intended as an added feature of the resort and to attract boat trips, was constructed at this time with some considerable difficulty, but this only lasted a few years before it fell victim to the pounding sea.

Molesworth and his colleagues were not to be put off, and in 1896 the Bideford, Westward Ho! & Appledore Railway Act was passed. The railway was initially planned as a 3 foot gauge line but the Act allowed for a change of gauge if required. Having secured the Act, the promoters then opted for standard (4′ 8 ½”) gauge with a view to a possible extension back along the Quay and over the river by way of a swing bridge to connect up with the main line just south of Bideford’s main station. This would have enabled through trains to operate from Appledore to the rest of the country. The promoters’ grand plans also envisaged a dock to be built at Westward Ho! to attract the yachting fraternity to the resort but this idea never materialized.

The decision to alter the gauge angered Bideford Town Council and was to plague relations between the parties for most of the life of the line. Nevertheless work commenced on purchasing the necessary land required for the railway. Many landowners were involved, some proving more difficult than others in spite of the compulsory purchase powers contained in the Act. Those owners anxious not to lose out to the railway company had comprehensive land valuations carried out on their behalf, and others demanded written undertakings promising not to encroach on their land during any deviation work found to be necessary. In spite of this opposition however construction proceeded apace and the line opened to Westward Ho! in 1901. Construction was again hit by problems with the contractor. The first firm were replaced and sued for breach of contract for not meeting contractual deadlines. After a pause for consolidation the extension to Appledore was opened in 1908.

At a very early stage the company was taken over by the British Electric Traction Company which was keen to develop tramway and light railway services generally and announced plans to extend operations towards Clovelly and Hartland. These plans never came to fruition and were soon quietly dropped. A mix of tramway and light railway, the Westward Ho! & Appledore was uncomfortably unique in being isolated from the rest of the system; its circuitous route did little to make for a smooth operation. Arguments over the provision of a run-round loop on Bideford Quay and the length of time trains could stand on the Quay continued to sour relations with a Council already in an unfriendly mood over the initial change of gauge. The line was unfortunately always regarded as a nuisance by a percentage of the local population.

A comprehensive timetable operated, especially during the summer months, but it was hardly designed to attract regular ‘commuter business’ and operating profits were never at an acceptable level. The directors attempted to woo the visitor with entertainment laid on in Westward Ho! but travellers arriving in Bideford and wishing to travel to Westward Ho! and Appledore were loath to carry their luggage over Bideford bridge and transfer to the BWH&A line when a cheaper and quicker alternative in the form of a motorbus was parked in the station yard. The intervention of the War Office in 1917 to commandeer the track and locomotives for war service was thus probably welcome news to the directors. The track was taken up, locomotives shipped out and the rolling stock laid up. Two of the unfortunate locomotives fell victim to enemy torpedoes even before they had left home waters and reputedly still lie at the bottom of the Bristol Channel, although this point proves a matter for some argument from time to time.

In spite of a short life of only sixteen years and the fact that it disappeared nearly one hundred years ago, the line is much loved by railway enthusiasts and historians alike. It is difficult today to imagine a railway running along Bideford’s Quay and nothing remains of its presence. The Company’s office was housed in what is now the Nationwide Building Society building which has been altered beyond recognition. The first, and largest reminder of the railway, is Heards coach garage a little way up Kingsley Road just past the football ground. This is the old railway carriage shed which continues its original intended role of providing storage for passenger carrying vehicles, although of not quite the type intended. The locomotive shed stood a few yards further on, but this was unfortunately knocked down quite recently.

The last reminder of Westward Ho! station – the remains of the station hall – was demolished recently to make way for new developments. It is still possible to trace some of the track bed of this fascinating little line, although much of that which remains is on private land. The best examples can still be seen on the walk from Seafield House at Westward Ho! up along the cliff top towards Cornborough where evidence of the cutting through which the line passed are visible. Here too can be seen a few remaining stumps of the old pier jutting out of the sea at low tide near to Seafield House. At Appledore there is a reminder of the railway in the form of a recently erected ceramic mural which is fixed to the curiously remaining part of the back wall of the station building in Torridge Road. Otherwise only handed-down memories and fading photographs remain.