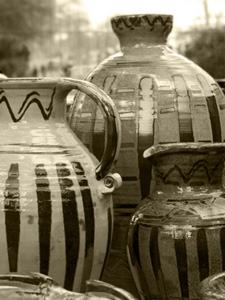 Pottery made in Bideford, in the North Devon Tradition is very important to the history and prosperity of the town. It dates back to Medieval times with the greatest days being in the 17th and early 18th centuries. The industry grew as clay was available from Fremington, Peters Marland (white clay, also used for tobacco pipes) and Meeth.
‘Sgraffito’ ware
Traditional North Devon style pottery is made when the slip from white clay is scratched away from the surface into a design, revealing the clay beneath. Subjects are usually nautical, commemorative, natural history and harvest time. Hundreds of potters kept the industry going in and around Bideford and there were also potteries at Instow and Westleigh.
Bideford’s port
Bideford of the 17th Century was a significant town and port with the boom time for pottery being between 1630 and 1690. There were a number of places of production with up to 30 or 40 kilns at any one time billowing out black smoke. As well as domestic trade, the ‘bread and butter’ trade was with Wales, particularly Swansea, Carmarthen and Cardigan and in the North Western and Southern coasts of England. Exports expanded the industry and contributed greatly to Bideford’s prosperity. 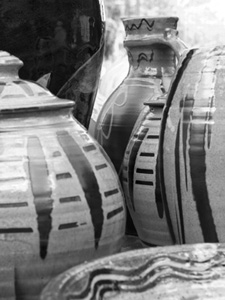 Trade with Ireland
In the 17th and early 18th centuries, Ireland was a major market for Bideford Pottery and the majority of its wares were exported there. A large amount of pottery was sent to Ireland in the 1600’s, to Dublin, Galway and Limerick. Butter booms of the 17th century expanded the trade, particularly with Waterford and Ross in Southern Ireland, contributing to both North Devon’s and Ireland’s prosperities. There were very probably settlers from North Devon in Ulster in the 17th century and this began the trade here.

Trade with the English Colonies
The other big markets were the English Colonies in North America and the Caribbean. These shipments only made up about 15% of the overseas export but they were very important in laying the foundation for Colonial trade. In Virginia the largest deposits of North Devon Pottery outside of Jamestown have been found – pre-dating 1650.

Bideford merchant Thomas Smith regularly traded with Virginia. This expanded greatly towards the end of the 17th century. North Devon settlers were on the Eastern shore of Chesapeake Bay, North Carolina, down through the Outer Banks Region in the late 17th and early 18th centuries. Merchants offered passage there by ship, carrying servants from Bideford and Ireland so merchants sent ships to Virginia and developed trade. 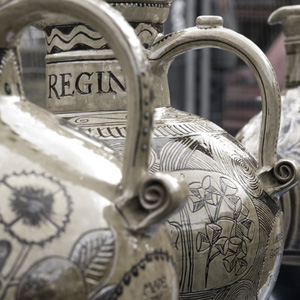 The 17th Century saw an important relationship between pottery being exported to Virginia and tobacco being shipped back to Bideford on return. This trade enabled Bideford ships to set up trade in tobacco with Northern Europe. Merchant ships were built in Maryland and the colonies up to the 19 th century and transported to North Devon to be fitted out and finished. These ships were then used for the trade in earthenware with the colonies. North Devon pottery has been found in Newfoundland, connecting the fishing trade there

The end of the 17th century saw the trade with Northern colonies drop and then collapse. Despite a brief respite, overseas markets were lost and eventually plastic, enamel and glass replaced earthenware.