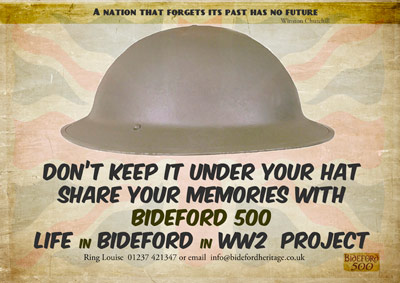 We would love to hear from people who have recollections and memories, or wish to share their families photos of Bideford life during the second world war, no matter how small they maybe, to help contribute to this important time in Bideford’s History.

Use the Contact Us page to get in touch.

You can read the research we have so far gathered :

Evacuees, Peoples memories of their time in Bideford as an Evacuee.

Bideford’s own  ‘Churchills Secret Army’   Bideford 500 have discovered for the first time, the brave volunteers who formed Bideford’s Auxiliary unit, also known as “The British Resistance”

World War Two – Bideford and the GI’s
America’s entry into the second World War, as a consequence of the Japanese attack on Pearl Harbour, brought American Troops to England and Bideford had its quota.

General recollections of life during the war in Bideford